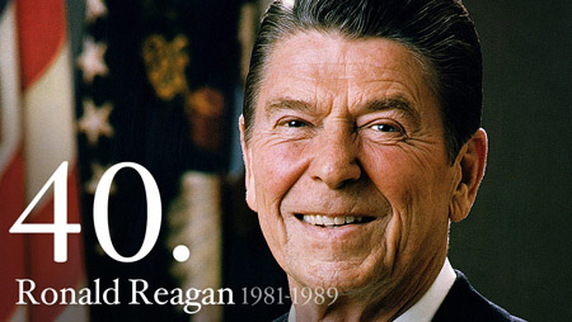 Click on the banner above to go to the Ronald Reagan homepage at the University of Virginia's Miller Center. Click on the buttons below for in-depth information about Reagan's Presidency. 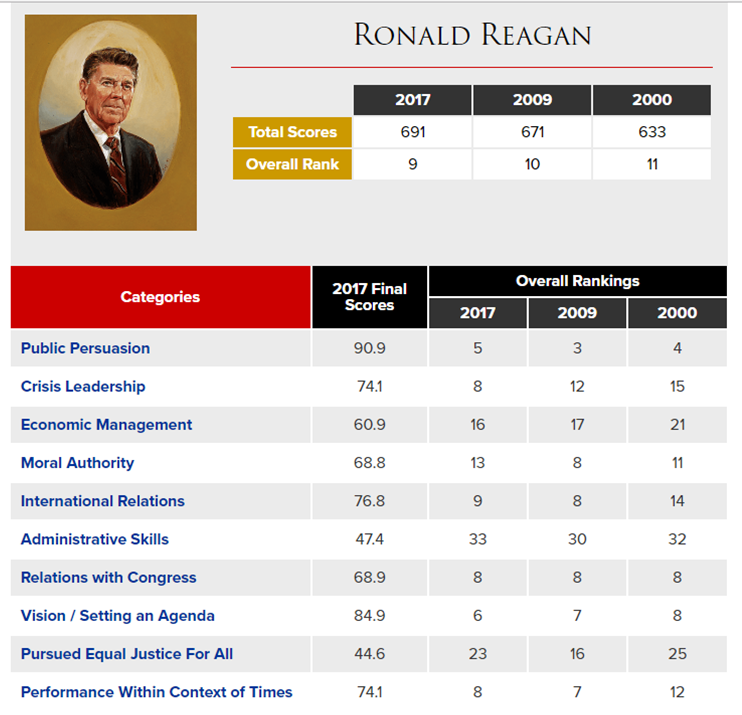 Reagan gave his famous "Tear down this wall!" speech in 1987. [Click here to view it.] Two years later, in 1989, the Berlin Wall was torn down... and two years after that, the Soviet Union collapsed, ending the Cold War.

In his 1984 re-election bid, Reagan received 525 electoral votes, the most of any candidate in U.S. history. He also garnered 58.8% of the Popular Vote and won 49 states in his race against the Democrat Walter Mondale.

In the Election of 1976, between President Gerald Ford and Jimmy Carter, Reagan received one Electoral Vote from a "Faithless Elector" (a member of the Electoral College that votes against how the state voted) even though he wasn't on the ballot.

After Russia shot down Korean Airlines flight 007, Reagan announced that the U.S. military's Global Positioning System (GPS) would be made available for civilian use once it was sufficiently developed.

Soon after Reagan became Governor of California in 1967, he began eating jelly beans in order to help him give up a pipe-smoking habit. When Jelly Bellies first appeared on the market in 1976, Reagan quickly switched to them. Three-and-a-half tons of Jelly Bellies were shipped to the White House for the 1981 Inaugural festivities. Blueberry, one of the most popular flavors, was developed for Reagan's inauguration so that there would be red, white, and blue jelly beans at the party. Reagan's favorite Jelly Belly flavor was licorice. (Typical "old guy" flavor...)

The presentation of a Thanksgiving turkey to the President each year began in 1947 under Truman, and many sources erroneously attribute the origin of the turkey "pardon" to Truman. However, no documents, speeches, newspaper clippings, photographs, or other contemporary records are known to exist that specify that he ever "pardoned" a turkey. There are records that he publicly admitted to eating at least some of them. President Eisenhower ate the birds presented to him during his two terms. President JFK spontaneously spared a turkey on Nov. 18, 1963, just four days before his assassination, but the act was done out of discomfort toward its size, not out of empathy. The bird was wearing a sign that read: "Good Eatin' Mr. President." The first President on record issuing a "pardon" to his turkey was Reagan, who pardoned a turkey named "Charlie" and sent him to a petting zoo in 1987. The reference to it being a "pardon" was in response to criticism over the Iran-Contra Affair, in which Reagan had been questioned on whether or not he would consider pardoning Oliver North, a National Security Council staff member who had yet to be tried for his involvement in the scandal. Reagan conjured the turkey pardon as a joke to deflect those questions. Reagan did not pardon a turkey in his final year as President in 1988, but his successor, George H. W. Bush, instituted the turkey pardon as a permanent part of the presentation beginning his first year in office in 1989. Since then, the turkey is "pardoned" and taken to a farm where it lives out the rest of its natural life. Only in America!

While visiting California in 1937 to cover a sporting event, Reagan was asked to play a radio announcer in the film Love is on the Air, which jump started his film career. For a number of years, Reagan worked on as many as four to seven movies a year. By the time he acted in his last film, The Killers in 1964, Reagan had appeared in over 50 films and had become a very famous movie star. Reagan's most famous role came when he played the ill-fated Notre Dame gridiron great George Gipp. Most people remember Reagan in this role because of his "Win one for the Gipper" speech.

Reagan was the first President to have been divorced. His first marriage to actress Jane Wyman lasted from 1940-1948. Nearly four years later, on March 4, 1952, Reagan married the woman he would spend the rest of his life with, actress Nancy Davis.

Reagan was known for writing personal checks (sometimes $4,000 or $5,000) to citizens who wrote to him about their money problems. "Reagan was famous for firing up air force jets on behalf of children who needed transport for kidney operations," Frank J. Kelly, who wrote Presidential messages, said in the book In The President's Secret Service.

On March 30, 1981, as he returned to his limousine after a speech at the Hilton Washington Hotel in the capital, Reagan and three other men were shot and wounded by John Hinckley, Jr. Reagan was struck by a single bullet which broke a rib, punctured a lung, and caused serious internal bleeding. He was rushed to nearby hospital for emergency surgery and was then hospitalized for two weeks. Upon release, he resumed a light workload for several months as he recovered. He was the first sitting President to survive being shot in an attempted assassination. Hinckley was immediately subdued and arrested at the scene. Later, he claimed to have wanted to kill the President to impress the teen actress Jodie Foster. He was found not guilty by reason of insanity and has remained under institutional psychiatric care since. Besides Reagan, White House Press Secretary James Brady, Secret Service agent Tim McCarthy, and D.C. police officer Thomas Delahanty were also wounded in the attack. All three survived, but Brady suffered brain damage and was permanently disabled.

Reagan nominated Sandra Day O'Connor as an Associate Judge of the U.S. Supreme Court. With her confirmation on September 22, 1981, she became the first female to serve on the Supreme Court and served until her retirement in 2006. Reagan made the nomination in part because it was one of his early campaign promises during his race to the White House.

During his college years, Reagan performed lifeguard duties at Lowell Park in Illinois where he saved 77 people from drowning.

Throughout his Presidency, Reagan coined several phrases that are still used today, including "New World Order", "Privatization", "The Welfare Cadillac", and, most, famously "Trickle-Down Economics"... a.k.a. "Reaganomics".

As a UFO buff, Reagan unofficially claimed to have sited UFOs on at least two occasions.

Reagan liked to feed the squirrels outside of the Oval Office. On his last day in the White House, Reagan left a sign on the Oval Office door addressed to the squirrels that said "Beware of the dog!" He did this because, according to Reagan, "Our dog Millie came in and beat the heck out of the squirrels." (It would be safe to assume that Dr. Hartnell's educational squirrel, Nutty, would have liked Reagan.) 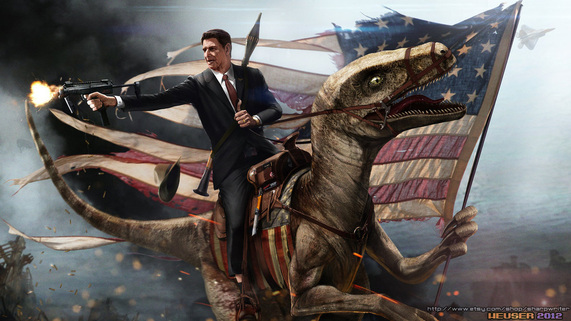 And this, kids, is exactly why we won the Cold War... [Click picture for a larger version.] 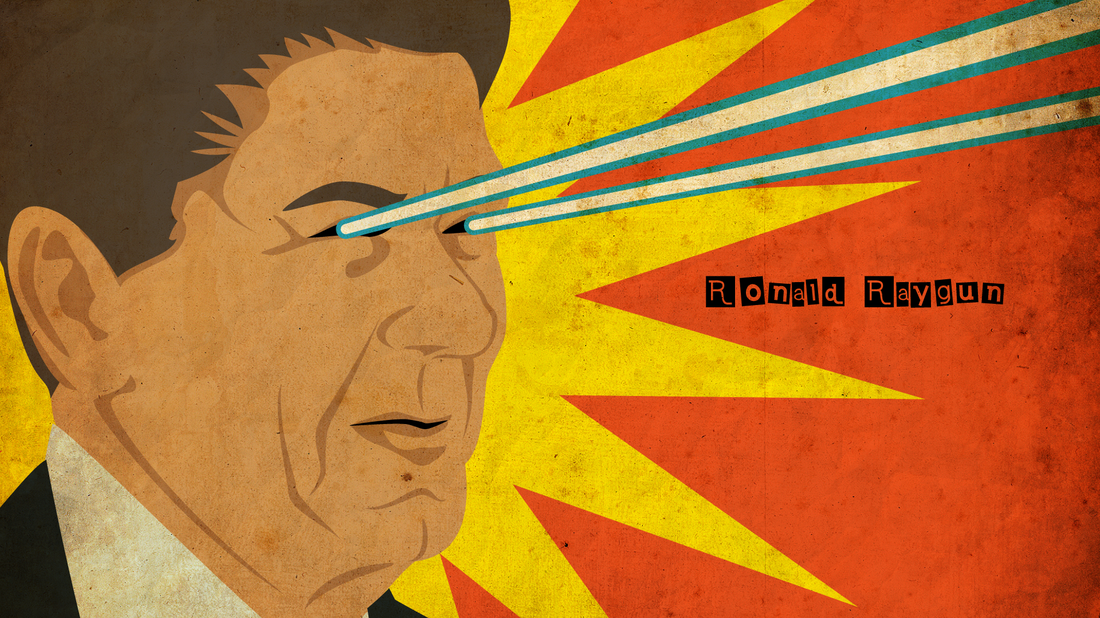 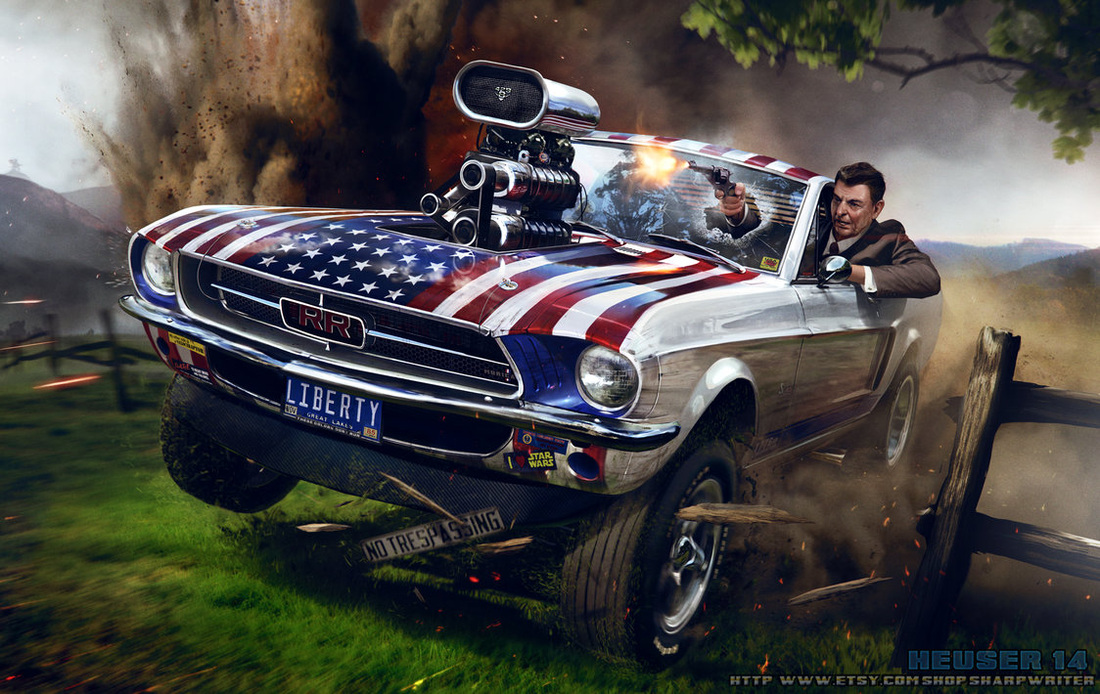 There were 10 things that made the '80s such a great decade. Can you find all 10 within this 1984 campaign photo of President Reagan? [Click picture for a larger version.]