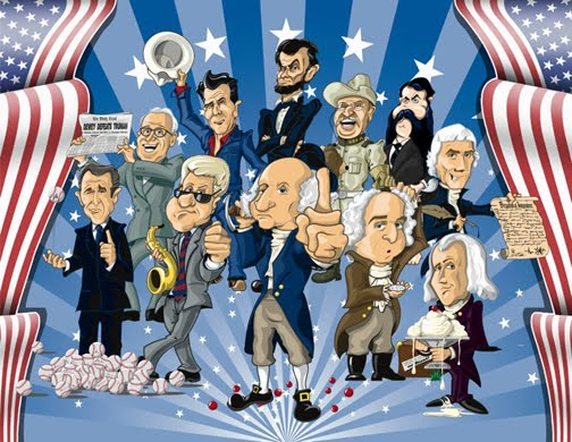 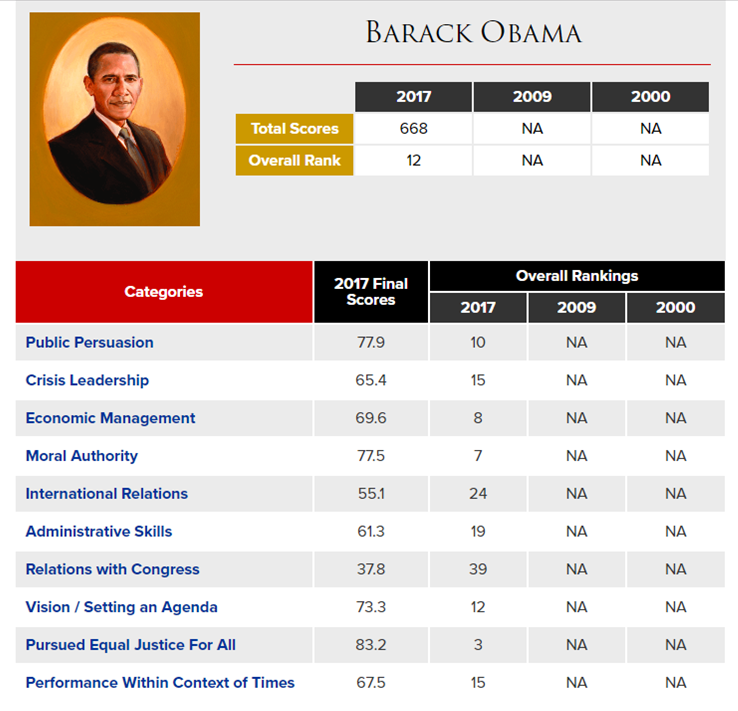 The 10 Categories of Presidential Leadership

The ability to persuade the public to his point of view is one of the most powerful weapons a President possesses. It's also one that he most needs to succeed. Many times Congress is forced to enact a large part of a President's agenda because the public likes him. However, if a President has a hard time connecting with the public, this can spell doom for his agenda and cause scandals to be blown out of proportion by an angry public. How a President is perceived by the people (or how he "charms" them) greatly affects his standing in the ranks. 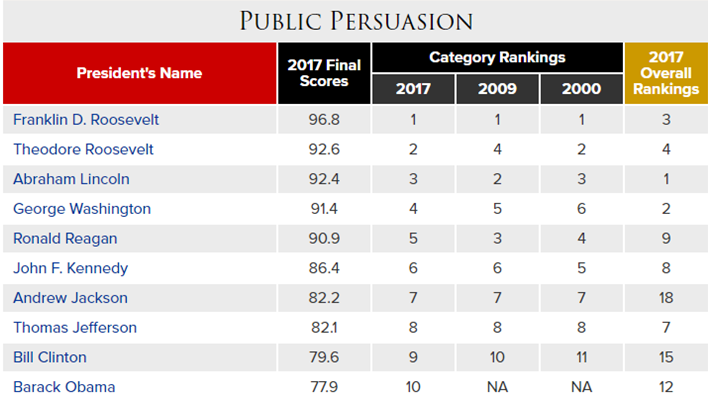 The U.S. public looks to the President as its political and economic leader, especially when the proverbial crap has hit the fan. If a President takes office in the midst of an economic crisis (recession, depression, etc.), how did he handle it? A successful President has to have a program ready to stimulate the economy if necessary... and he has to be able to pass it (which can be affected by his relationship with the public or Congress). "Crisis Leadership" also refers to international (foreign) crises. If the U.S. went to war during his Presidency, how did he handle it? Did the country come out of the conflict stronger or weaker? Was the country greatly split over going to war? If the U.S. was attacked, how did your President respond? Was the President able to unite the country and guide it through the war? The way a President reacts to major crises (at home or abroad), greatly affects his standing with the public and his rankings in the polls. 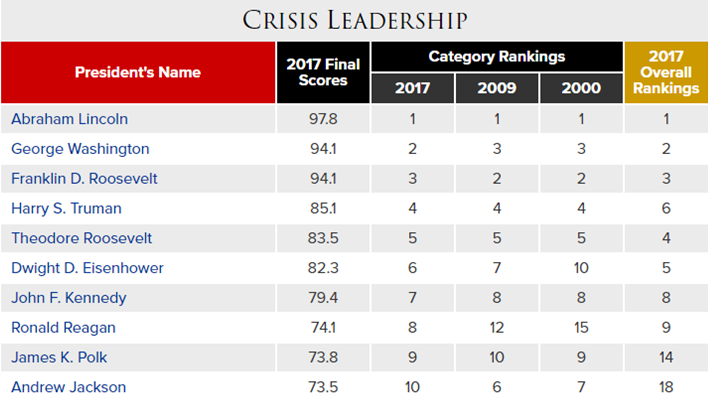 A President is held responsible for the economic climate of the country, whether times are good or bad when he assumes the role as Chief Executive. How was America's economy during a certain President's time in office? How much "credit" and how much "blame" does a President deserve for the economy? What were his economic policies? How was trade within the U.S. and with foreign countries? Were there new jobs being created, or were people out of work and starving? A booming economy can get a President re-elected even if he is facing personal scandals... and a bad one is a one-way ticket to defeat at the polls. (NOTE: The ranking given for a President's ability to handle economic crises was not included in this category. It was put in the "Crisis Leadership" category. However, the ranking given for a President's actual economic plan itself was taken into consideration for this category.) 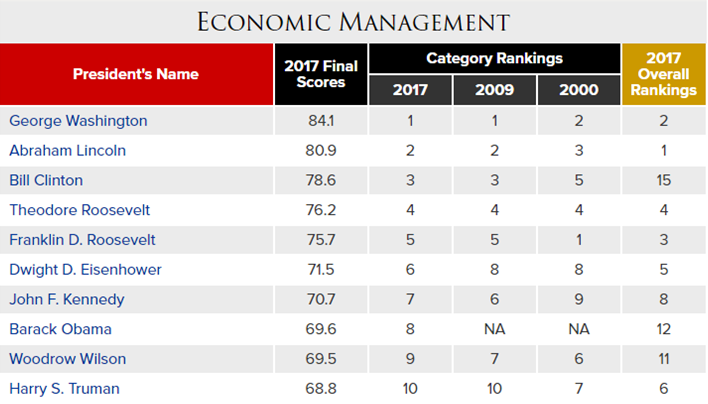 What kind of person was a President? Would you leave your daughter in a dark room with him? The attributes of morality (a President's character and integrity) are important when judging Presidents. A President who promotes corruption, lies to the public, or is involved in scandals will obviously be ranked lower than an honest President. At the same time, a President who wasn't very successful in office often times can restore his reputation and rise in the rankings for being a true humanitarian and an honest person. 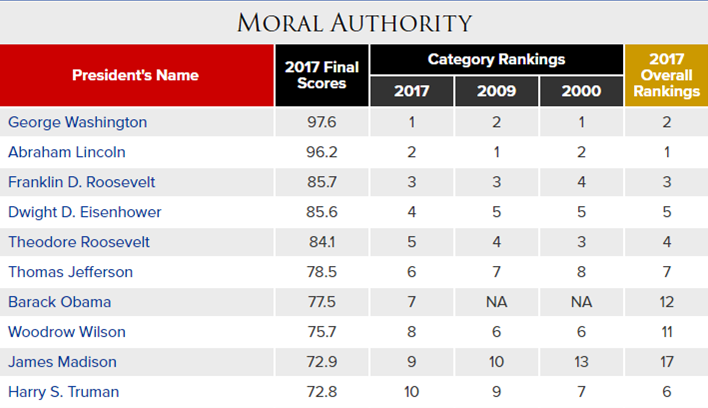 Major international (foreign) policy success can make up for domestic (home) failure. Respect from foreign nations is very important. What types of treaties were signed with foreign nations? Did the public approve? In general, how did the world view the U.S. during a President's time in office? If there were repeated wars, what was the world's take on them? Did the world view the U.S. as the aggressor or as a country there to help? (NOTE: The ranking given for a President's ability to handle foreign crises/wars was not included in this category. It was put in the "Crisis Leadership" category. However, the ranking given for the number and frequency of foreign conflicts was taken into consideration for this category.) 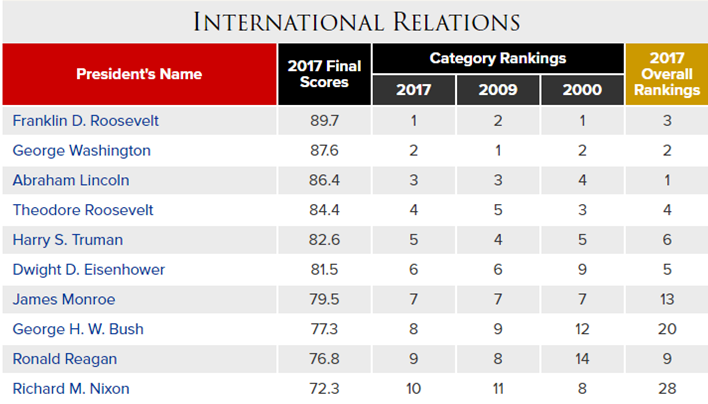 Simply put, did a President know how to act as a President? A President has to make policy (domestic and foreign) for the country. The President outlines his policies in his inaugural address, his annual State of the Union addresses, and especially in his budget proposals. Presidents are also measured by the people they appoint to public office. This area of evaluation includes appointments to the U.S. Supreme Court and to his Cabinet. Poor selection in these areas destroyed many Presidencies when the appointees turned out to be inept and corrupt. Appointing good, skilled people reflects positively on a President. 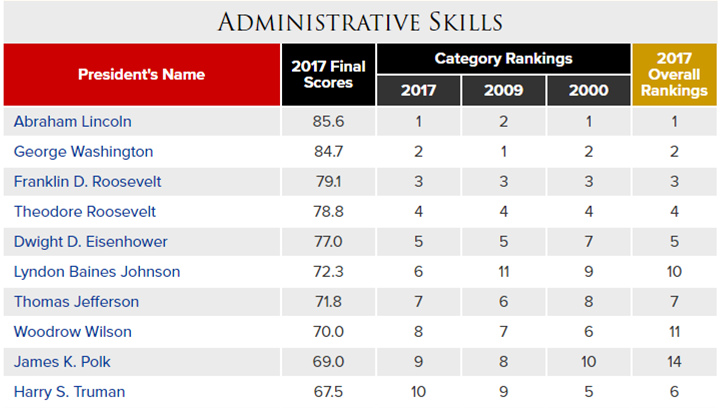 The President doesn't get to call all of the shots. (That's something a KING would do, and, well, the Founding Fathers were a wee bit obsessed with NOT heading that direction after independence...) This often means a President has to get along with a Congress full of people from his rival political party. (Yea, it's like watching two angry babies stare at each other.) How successful was a President in getting legislation through Congress? Did Congress get along with a President, or was there constant bickering and vetoing? A President's relationship with Congress can make his Presidency a living Hell if he isn't careful. If he is pushy and takes a heavy-handed approach, Congress may resent him, and he is not likely to be very successful. If a President is willing to lobby Congress and bargain and deal with its members, he can be very successful. This is always made easier when public opinion is on the President's side, thus giving him the upper hand with Congress. 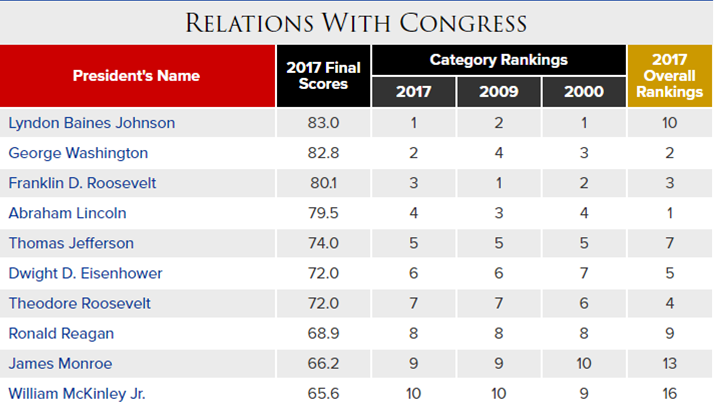 Some Presidents come into office without a vision of what they want to accomplish. For some, this is unexpected because they were catapulted into the Oval Office after a Presidential assassination or death. However, for those elected straight into office, not having a vision usually results in a failed Presidency. Without a master plan, a President is at the mercy of Congress, which can take over and make policies for the country. The more successful Presidents have had a vision and wanted to use the office of President to change the U.S. With a vision to guide them, Presidents tend to be more active as they try to implement their agenda. Even if they're not successful, they still get credit for having had a vision... despite leaving D.C. with a basket of broken dreams. (Sort of like that NBA career you were going to have? Remember that? Eh, champ?) What were your President's "goals"? Did he achieve them? 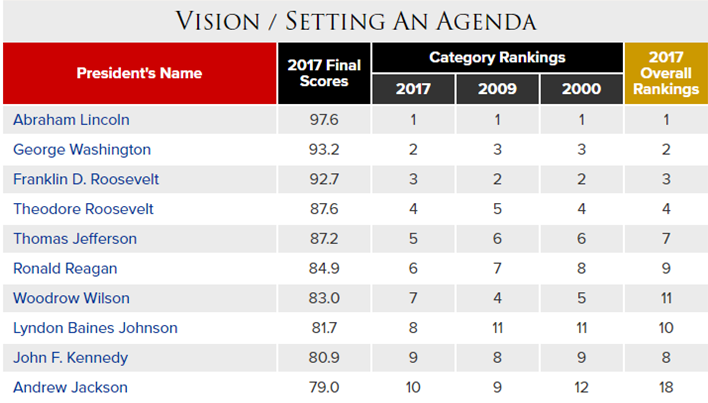 In modern times, a President's legislation has been judged according to the impact his policies have had on social equality in U.S. society. Policies that benefit minorities and the poor enhance a President's ranking in the polls. How did a President treat minorities? Did he pass any legislation that helped the advancement of minorities... or did he owna few? If slavery existed during your President's tenure, what was his stance? Did he unite (or divide) America concerning the slavery issue? Did he support the Civil Rights Movement? In the end, did he do as the category suggests... and "pursue equal justice for all"? 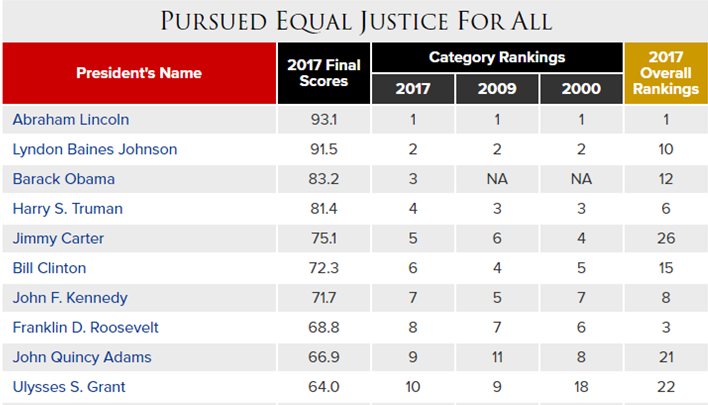 Obviously, the political issues during the early days of the U.S. versus more recently are so drastically different that many of the early Presidents will lose points when judged through today's "standards" (such was the case in the category "Pursued Equal Justice for All"). Certainly, slavery is no longer an issue today... which means it isn't part of a modern-day President's policy whereas it might have been the only issue discussed when a President was in office. For reasons such as that, this category is factored into a President's overall ranking. All things considered, how did a President do with what he had available to him at the time? While not necessarily correct when viewed by historians today, were a President's appointments, decisions, policies, and legislation "in line" with the status quo of his day (meaning "everyone was doing it")? (Keep in mind, if your President tried to change the country and go against the status quo, that factored more into his "Vision/Setting Agenda" ranking.) This was the toughest category to rank and is best summed up by the following quote: "What's popular is not always right... and what's right is not always popular". 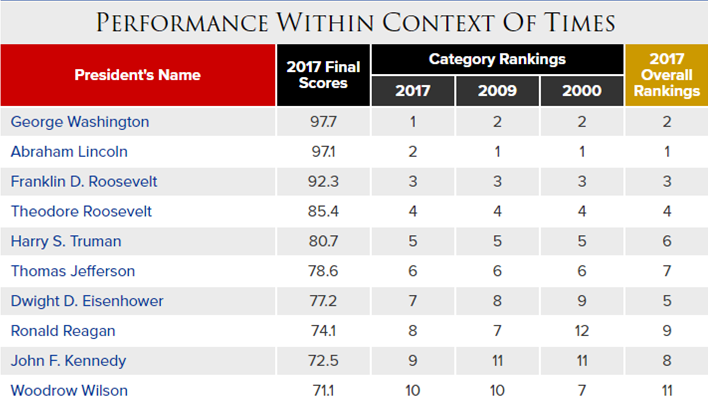 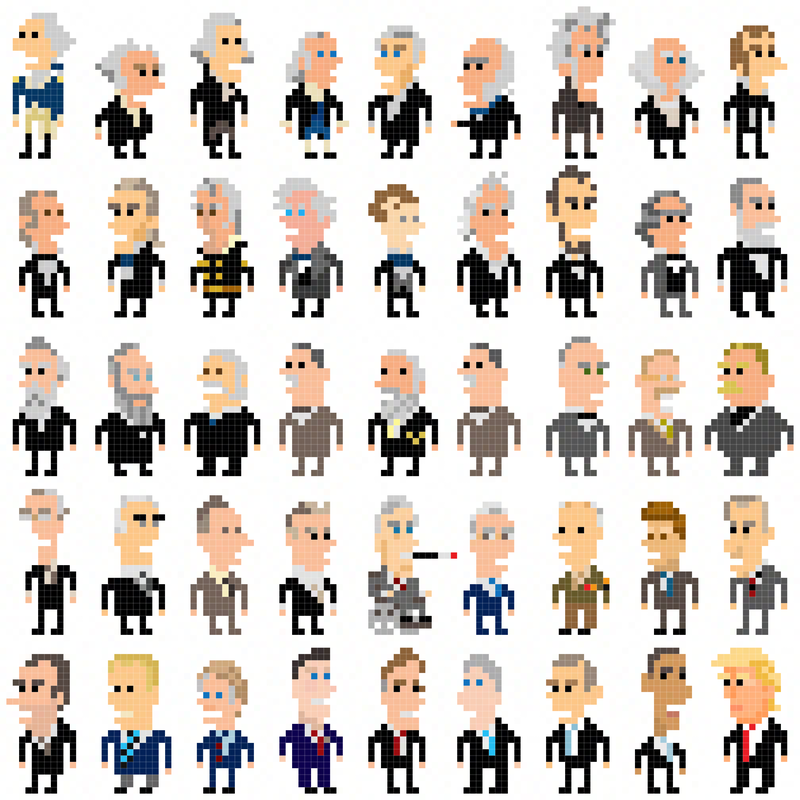 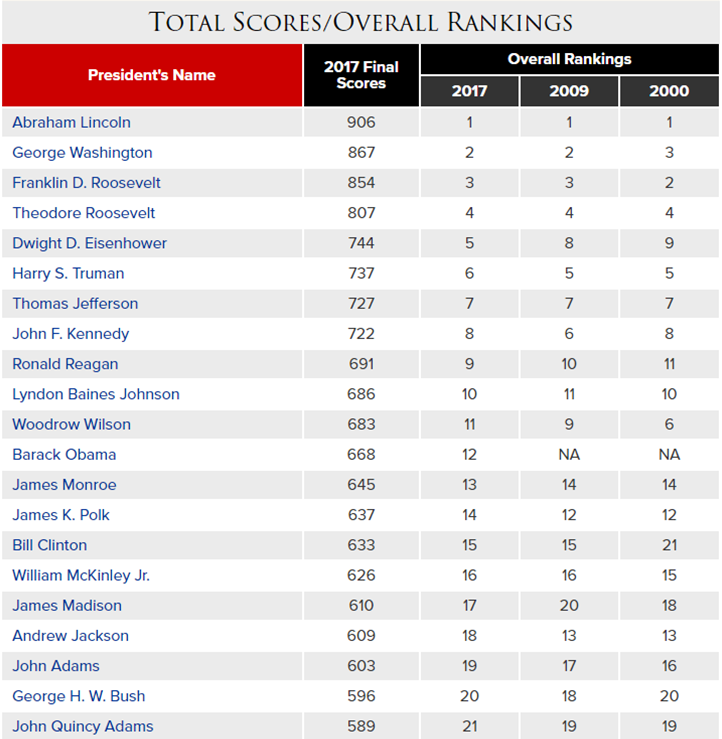 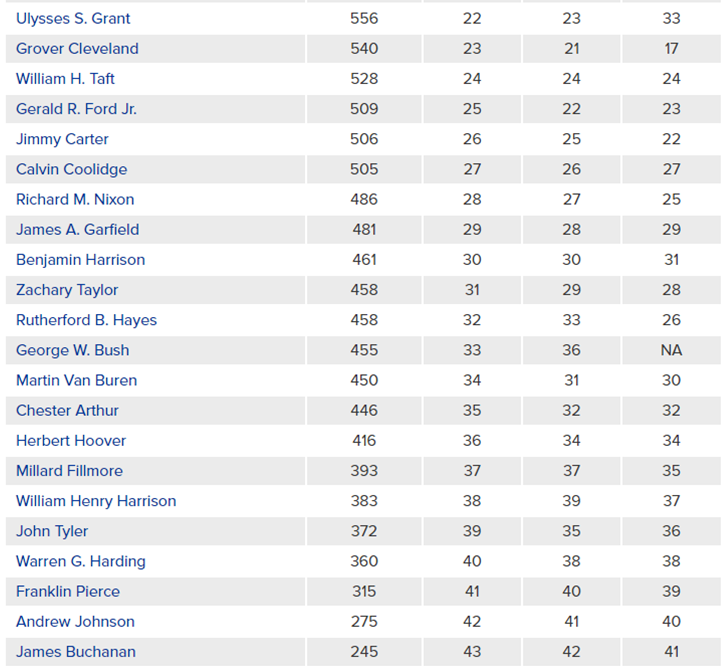 Click here to return to the U.S. Presidents page