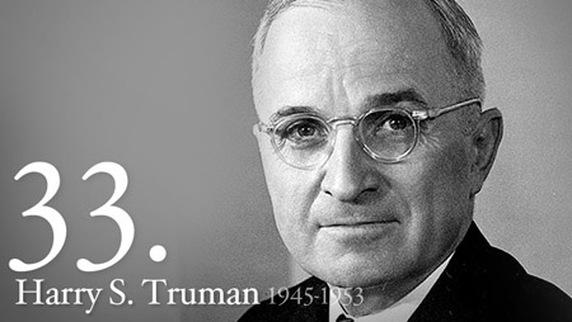 Click on the banner above to go to the Harry Truman homepage at the University of Virginia's Miller Center. Click on the buttons below for in-depth information about Truman's Presidency. 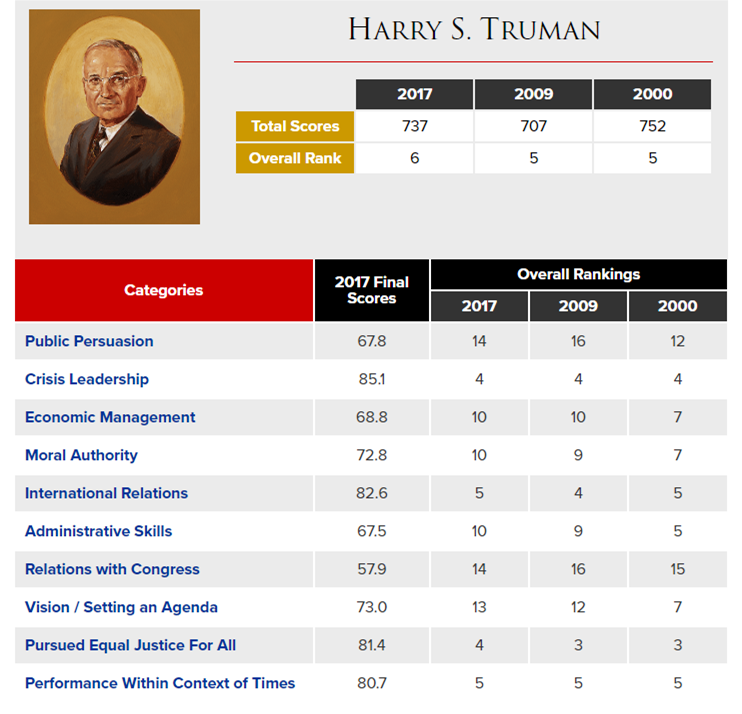 When he was young, Truman used to get up at 5am to practice piano twice a week. Later in life he commented, "My choices in life were either to be a piano player in a whore house or a politician. And to tell the truth, there's hardly any difference!"

Poor eyesight prevented Truman from participating in sports but led him to two of his greatest passions, reading and music. An avid reader, he was proud of the fact that he had read every book in the Independence Public Library in Missouri.

Some historians claim Truman was inducted into the Ku Klux Klan (KKK), even though he was "never active".

As President, Truman lead the country through two major wars: the end of World War II (1939-1945) - which included him having to make the decision to drop atomic bombs on Hiroshima and Nagasaki, Japan - and the Korean War (1950-1953).

The "S" in Harry S. Truman doesn't stand for anything. Unsure whether to honor his grandfather on his mother's side (Solomon Young) or his grandfather on his father's side (Anderson Shipp Truman), the family decided to just make it "S". Over the years, historians have debated whether or not to use a "." after the "S" since he never technically had a middle name. Truman himself used a period, so most people today spell his name out as "Harry S. Truman".

Truman's mother, who was a Confederate sympathizer, refused to sleep in Lincoln's bed during a White House visit.

In recognition of Truman's contribution to medical insurance, President Lyndon B. Johnson presented the first two Medicare cards to Truman and his wife, Bess.

There were two assassination attempts on Truman. The first came in the summer of 1947. Pending the independence of Israel, the Zionist Stern Gang was believed to have sent a number of letter bombs addressed to Truman and high-ranking staff at the White House. The mail room of the White House intercepted the letters and the Secret Service defused them. The next came on November 1, 1950 when two Puerto Rican pro-independence activists, Oscar Collazo and Griselio Torresola, attempted to kill Truman at the Blair House, where Truman lived while the White House was being renovated. In the attack, Torresola mortally wounded White House Policeman Leslie Coffelt, who killed the attacker with a shot to the head. Collazo wounded another officer but survived with serious injuries. Truman was not harmed at all in the attack. As such, he reduced Collazo's death sentence to life in prison. In 1979, President Jimmy Carter commuted the sentence to time served. This allowed Collazo to return to Cuba, where he was honored by Cuba's President Fidel Castro. (Thanks, Jimmy...)

Truman met his future wife, Bess, in Sunday school... when he was six years old.

Truman was known for a series of one-liners. One of Truman's most famous quotes was: "The buck stops here!" He had a sign with that quote on his desk in the White House. Some of his other famous zingers included:

Truman enjoyed taking walks. He walked for two miles every morning at a pace of 128 steps per minute. (Give it a try on the way to your next class!)

The presentation of a Thanksgiving turkey to the President each year began in 1947 under Truman, and many sources erroneously attribute the origin of the turkey "pardon" to Truman. However, no documents, speeches, newspaper clippings, photographs, or other contemporary records are known to exist that specify that he ever "pardoned" a turkey. There are records that he publicly admitted to eating at least some of them. President Eisenhower ate the birds presented to him during his two terms. President JFK spontaneously spared a turkey on Nov. 18, 1963, just four days before his assassination, but the act was done out of discomfort toward its size, not out of empathy. The bird was wearing a sign that read: "Good Eatin' Mr. President." The first President on record issuing a "pardon" to his turkey was President Reagan, who pardoned a turkey named "Charlie" and sent him to a petting zoo in 1987. The reference to it being a "pardon" was in response to criticism over the Iran-Contra Affair, in which Reagan had been questioned on whether or not he would consider pardoning Oliver North, a National Security Council staff member who had yet to be tried for his involvement in the scandal. Reagan conjured the turkey pardon as a joke to deflect those questions. Reagan did not pardon a turkey in his final year as President in 1988, but his successor, George H. W. Bush, instituted the turkey pardon as a permanent part of the presentation beginning his first year in office in 1989. Since then, the turkey is "pardoned" and taken to a farm where it lives out the rest of its natural life. Only in America!

Truman's insane attention to detail was demonstrated when he walked into the White House's Green Room and looked down at the rug. Something bothered him about that rug, and after a few glances he realized that the head of the eagle on the Presidential Seal in the center of the rug was turned the wrong way. Instead of facing the olive branch, this eagle's head pointed toward the arrows. Truman promptly ordered that the rug be re-stitched with the eagle's head turned the correct way.

Ten Presidents did not attend (or did not graduate from) college. Truman was the 10th, but the only one in the 20th Century, to hold that distinction.

When Truman ran against Republican Thomas E. Dewey for re-election in 1948, things weren't looking good for the incumbent. Trailing in many of the early polls, Truman looked like he was on his way out. The Chicago Tribune (a Republican-leaning newspaper that had called Truman a "nincompoop" during his first term) excitedly (and incorrectly) predicted that Truman would lose his re-election bid... so they printed up their papers early with headlines reading "DEWEY DEFEATS TRUMAN" [pictured below]. Some 150,000 copies of the paper had already been published with the erroneous headline before the gaffe was corrected. (Truman, as it turned out, won the Electoral Vote 303-189 and the Popular Vote 49.6% to 45.1% - or a shade over 2.1 million votes.) The Tribune was not the only paper to make the mistake. The Journal of Commerce had eight articles in its post-Election edition about what could be expected of President Dewey. The paper's headline read, "Dewey Victory Seen as Mandate to Open New Era of Government-Business Harmony, Public Confidence". FAIL... 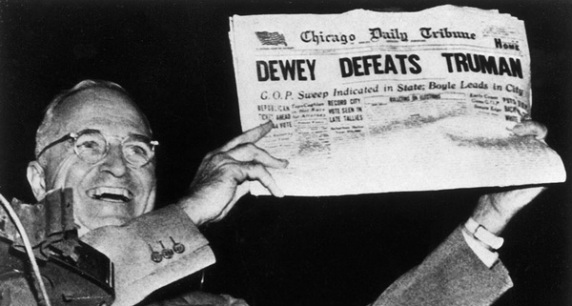 Truman had a pet goat named Dewey's Goat. This, of course, was a reference to Truman "getting Dewey's goat" in the Election of 1948 (and the famous newspaper debacle, which is shown above). The expression "get someone's goat" means to make someone annoyed or angry. This expression comes from a tradition in horse racing. Thought to have a calming effect on high-strung thoroughbreds, a goat was placed in the horse's stall on the night before the race. Unscrupulous opponents would then steal the goat in an effort to upset the horse and cause it to lose the race.

Truman owned a men's clothing store when he was 30. (This is where he got the nickname "Haberdasher Harry" since a "haberdasher" is a person who sells small articles for sewing.) The store went bankrupt and took Truman 15 years to pay off the debt.

When the House of Representatives wanted to award Truman with a Congressional Medal of Honor, he refused, saying he hadn't done anything to deserve it.

April 13, 1945 was Truman's first day in office. He told reporters: "Boys, if you ever pray, pray for me now... When they told me yesterday what happened, I felt like the moon, the stars, and all the planets had fallen on me." (FDR had died the day before. Truman found out about his passing while playing poker.)

Truman's wife, Bess, never found a laundry mat she liked in Washington, D.C., so she sent the family's clothes back to Independence, Missouri to be washed.