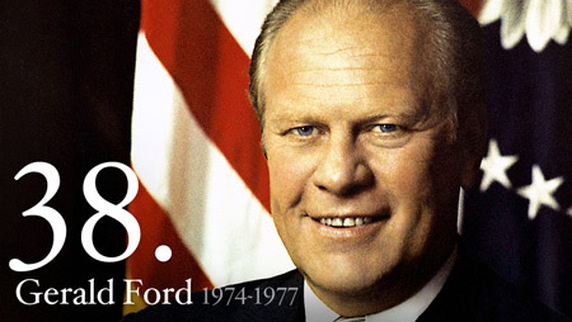 Click on the banner above to go to the Gerald Ford homepage at the University of Virginia's Miller Center. Click on the buttons below for in-depth information about Ford's Presidency. 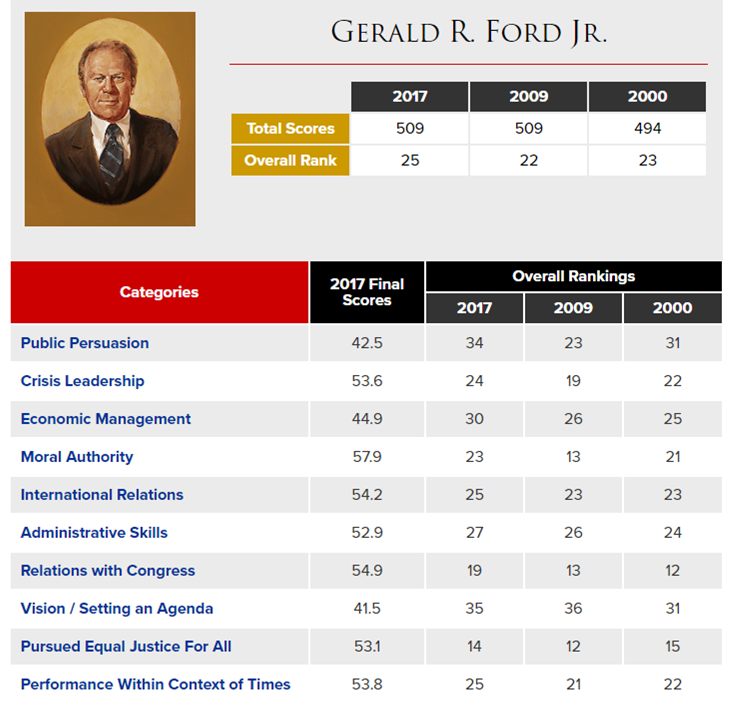 Ford was the first Eagle Scout to become President.

Ford attended the University of Michigan and played center and linebacker for the football team that posted undefeated seasons and national titles in 1932 and 1933. However, the Wolverines suffered a steep decline during his senior year in 1934... winning only one game. In fact, they lost 16-0 to their rivals, the Spartans of Michigan State College. The 1934 game saw Dr. Hartnell's grandmother, Eva McKim, "boo the future President since he was, at that time, just your typical U of M bum". (Ain't grandmas great?!)

Ford turned down offers to try out for the NFL's Detroit Lions and Green Bay Packers. (Later, when Ford and President Lyndon B. Johnson butted heads on issues of foreign policy, LBJ quipping that Ford had played "too much football without a helmet".)

Both Ford and his wife, Betty, had been models before their marriage. Despite this, when Ford proposed, he was wearing one brown and one black shoe.

Running for Congress in 1948, Ford had to campaign... on his wedding day.

Ford was one of the members of the Warren Commission appointed to study the assassination of President JFK.

One night, Ford was locked out of the White House while walking his golden retriever, Liberty. The Secret Service finally let him in.

Ford was the first President to release to the public a full report of his medical checkup. This is now a standard practice.

In November 1974, Ford became the first sitting President to visit Japan. The trip was also Ford's first abroad since replacing President Richard M. Nixon in August of that year.

Ford remains the only President who was never elected as either Vice President or President. Nixon's original Vice President, Spiro Agnew, resigned on October 10, 1973 amid charges of tax evasion. His resignation triggered the first use of the 25th Amendment as the vacancy prompted the appointment and confirmation of Ford, who was, at the time, the Minority Leader in the House of Representatives, as his successor. Just 10 months later, Ford would become President after Nixon resigned.

On September 8,  1974, Ford pardoned Nixon of all crimes associated with the Watergate Scandal. He granted, "a full, free, and absolute pardon unto Richard Nixon for all offenses against the United States which he, Richard Nixon, has committed or may have committed or taken part in during the period from January 20, 1969 through August 9, 1974." Ford's pardon of Nixon angered many in the public who felt that Nixon should have been held accountable for any crimes he might have committed. Historians point to the pardon as a significant factor in Ford's failure to win re-election in 1976 against Jimmy Carter.

Ford was the only Pesident whose two assassination attempts against him were made by women. In Sacramento, California on September 5, 1975, Lynette "Squeaky" Fromme, a follower of Charles Manson, drew a Colt M1911 .45 caliber pistol on Ford when he reached to shake her hand in a crowd. She had four cartridges in the pistol's magazine but none in the firing chamber. She was quickly restrained by the Secret Service. Fromme was sentenced to life in prison, but was released from custody on August 14, 2009 (two years and eight months after Ford's death). Just 17 days later, on September 22nd, Ford was shot at again in San Francisco. Sara Jane Moore (who had a fascination with the famous banker robber Patty Hearst) fired a revolver at Ford from 40 feet away. A bystander grabbed Moore's arm and the shot missed Ford. Moore was sentenced to life in prison. She was paroled on December 31, 2007 after serving 30 years. (It was more than a year after Ford's death.)

Ford had a particularly amusing knee injury; apparently, it  made him fall down. Or at least, that's what he claimed. While visiting Austria in 1975, the President's bum knee gave way and he tumbled down the Air Force One stairs. (Click here to see it!) A few more falls (one was even up the stairs) combined with Chevy Chase's Saturday Night Live pratfall routine, earned Ford the reputation as a bumbling klutz. (Click here to see the SNL skit "Christmas Eve at the White House"...)

Despite his affiliation with the Republican Party as President, Ford was more moderate than many people realize. In his later years of life, Ford spoke in favor of both abortion and gay rights and openly criticized President George W. Bush for the 2003 war in Iraq.