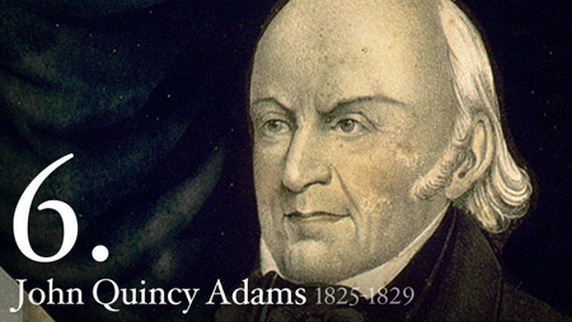 Click on the banner above to go to the John Quincy Adams homepage at the University of Virginia's Miller Center. Click on the buttons below for in-depth information about J. Q. Adams' Presidency. 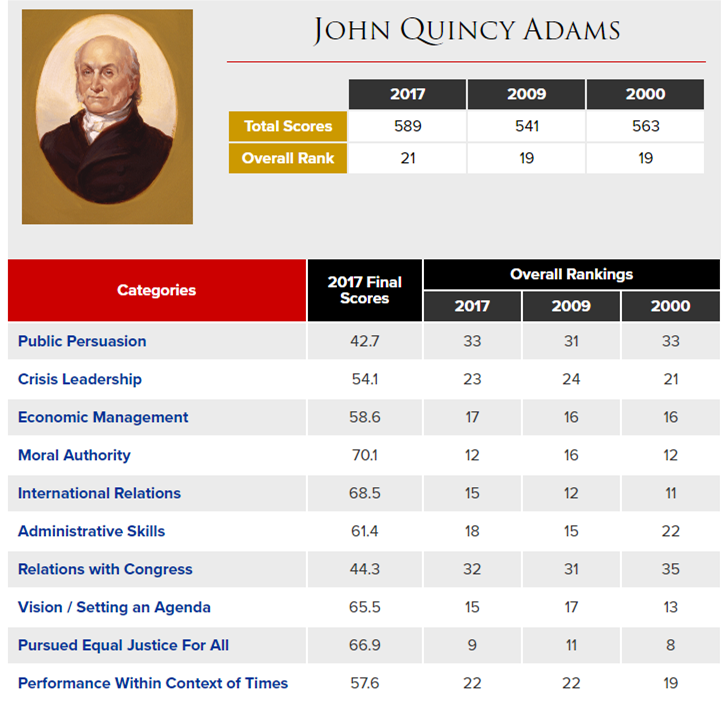 J.Q.'s father, John Adams, was the 2nd President. His father was also a one-term President. George H. W. Bush and his son, George W. Bush, are the other father-son Presidential combo.

J.Q. was the first President to have a middle name. His middle name came from his maternal great-grandfather, John Quincy, after whom Quincy, Massachusetts, is also named. (In all, 17 Presidents did NOT have middle names.)

J.Q. broke tradition by taking the Oath of Office on a book of constitutional law instead of the Bible. He did so to show that he was pledging himself to the U.S. Constitution. Presidents Teddy Roosevelt and Lyndon B. Johnson are the only other Presidents not to use a Bible when taking the oath. Roosevelt chose not to use one in 1901. LBJ was sworn in on a Roman Catholic missal (book of prayers and instructions for Catholic Mass) aboard Air Force One following the assassination of JFK in 1963. (JFK was Catholic.)

J.Q. let his father name his oldest son. John Adams named the child George Washington Adams in honor of the 1st President, George Washington. Sadly, G.W. Adams had a troubled life. He was a known alcoholic and womanizer and suffered from depression. In 1829, he committed suicide at the age of 28.

After his defeat by Andrew Jackson in 1828, J.Q. refused to attend the victor's inauguration, just as his father had boycotted Thomas Jefferson's in 1801. He wrote in his diary that "The sun of my political life set in the deepest gloom." Filled with sadness for the nation, J.Q. stayed in D.C. for a few months before returning home to Massachusetts.

Deeply bored by retirement and still hoping to be politically engaged, J.Q. agreed (despite his family's objections) when neighbors asked him to run for Congress. He set two conditions: he would never ask for their votes and he would follow his conscience at all times. His election was one of the greatest satisfactions in J.Q.'s life.

J.Q. is the only President to be elected to the House of Representatives after serving as President. J.Q. served nine terms in Congress from 1830 until his death in 1848. How dedicated was he? He literally died on the job. J.Q. suffered a massive cerebral hemorrhage while answering a question during a session in the House of Representatives. He died two days later in the Capitol Building, saying, "This is the last of Earth. I am content."

In 1826, Marquis de Lafayette gave J.Q. an alligator. The alligator lived in the White House for several months.

During the American Revolution, J.Q. and his mother watched the Battle of Bunker Hill from a hill near his house.

In 1841, and long after he had been President, J.Q. defended a group of African slaves who revolted on a slave ship named the Amistad. He argued for four hours before the U.S. Supreme Court... and won the slaves their freedom.

J.Q. was the first President to install a billiards table at the White House.

J.Q. got locked out of the White House. He returned from church one evening (and he often went to three different services on Sunday) to find the doors to the White House locked. He had to break a window to get in.

The relatively unknown Representative Abraham Lincoln served as a pallbearer at J.Q.'s funeral.