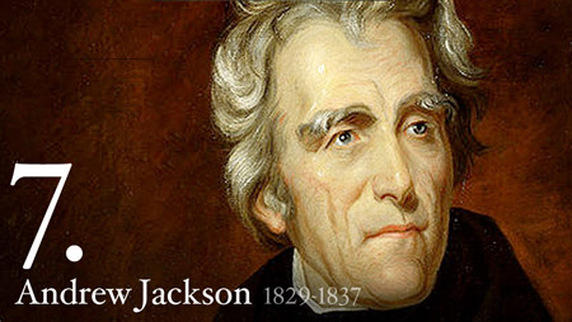 Click on the banner above to go to the Andrew Jackson homepage at the University of Virginia's Miller Center. Click on the buttons below for in-depth information about Jackson's Presidency. 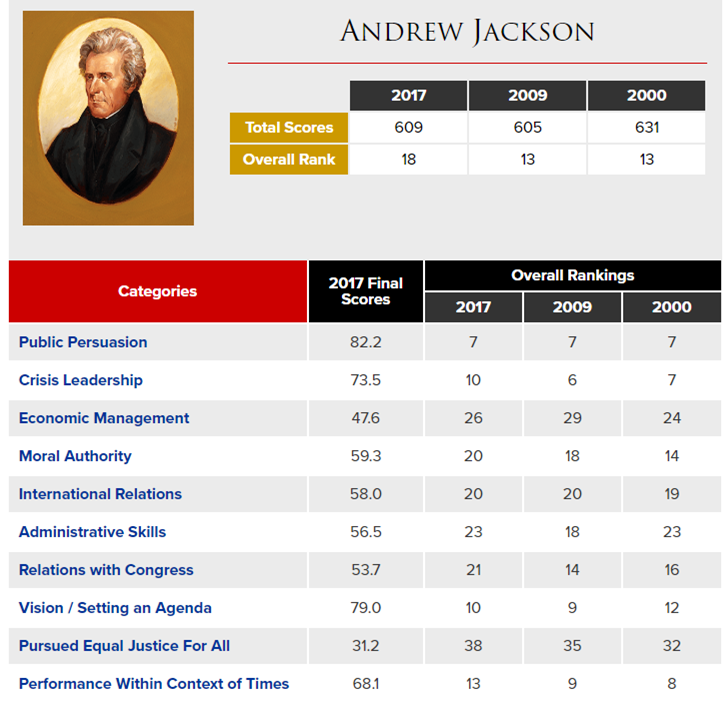 In May 1814, during the War of 1812, Jackson was named a Major General in the U.S. Army. On January 8, 1815, he crushed the British at the Battle of New Orleans and was lauded as a hero. (Britain suffered 2,042 casualties to America's 71.) Ironically, the Treaty of Ghent had been signed in December 1814, but news of the war's end did not reach Louisiana until February 1815... after the battle had been fought.

Jackson served in the military during the First Seminole War. He was ordered by President James Monroe in December 1817 to lead a campaign in Georgia against the Seminole and Creek Indians. Jackson was also put in charge of preventing Spanish Florida from becoming a refuge for runaway slaves. Jackson was so ruthless with the Seminole Indians that he followed them into Florida, burning their homes and crops as he went. (He was known as "Sharp Knife" by the tribe.) Many in Monroe's Administration suggested bringing him back before he caused a war with Spain. Florida was eventually sold to the U.S. in 1819, and Jackson was appointed their governor in 1821.

Jackson decided to run for President in 1824 against John Quincy Adams. Even though he won the Popular Vote, because there was not an Electoral majority, the House of Representatives determined the result. In what later became dubbed the "Corrupt Bargain", J.Q. Adams was made President in exchange for Henry Clay becoming Secretary of State. The backlash from this result would lead to Jackson's win in 1828... and his deep-rooted hatred of Henry Clay. The scandal also resulted in the Democratic-Republican Party splitting in two.

Jackson helped introduced the "spoils system" to Washington, D.C. when he placed over 2,000 of his supporters in government jobs and established a "Kitchen Cabinet" of informal advisors he trusted more than his actual Presidential Cabinet.

Jackson had a pet parrot named Poll. At Jackson's funeral in 1845, the parrot screamed curse words and had to be removed.

In 1833, Jackson became the first President to ride on a railroad train. He rode on a Baltimore and Ohio train from Ellicott's Mill, Maryland to Baltimore, Maryland for a total distance of 12 miles. (John Quincy Adams had also taken that train but not while he was President.)

On January 8, 1835, a Senator rose in Congress to make a big announcement: "Gentlemen... the National Debt... is PAID." That was the ONLY time in U.S. history when the country was debt free. It lasted exactly one year. When Jackson took office in 1829, the National Debt  was $58 million (which is $1.2 billion in today's money). Six years later, it was all gone. Paid off. And the Government was actually running with a surplus, taking in more money than it was spending. How'd he do it? In Jackson's mind, debt was "a moral failing"... and he didn't like it. To pay it off, he began selling the Western land owned by the Federal Government. He was also ruthless on the budget and blocked every spending bill he could. Poof. Debt. Gone.

Jackson was the only President to have been a P.O.W. (Prisoner of War). He was 13 when he joined the South Carolina militia as a courier to fight in the American Revolution. Jackson's eldest brother, Hugh, died from heat exhaustion during a battle in 1779. Jackson and his brother, Robert, were captured by the British and held as prisoners, nearly starving to death in captivity and contracting smallpox. When Jackson refused to clean the boots of a British officer, the officer slashed Jackson across his left hand and head with a sword.

Perhaps the most controversial aspect of Jackson's Presidency was his policy regarding Native Americans, which is considered the ethnic cleansing of several Indian tribes. Jackson was a leading advocate of a policy known as "Indian Removal". The most notable removal occurred with the Cherokee Indians. Over 4,000 died on the "Trail of Tears" from 1838-1839 when U.S. troops led 15,000 Cherokees out of Georgia (at gun point) and onto reservations in Oklahoma.

Jackson married his wife... twice. Jackson married a woman named Rachel Donelson in 1791. Rachel believed that she had been legally divorced after a failed first marriage. However, this was not accurate, and, after the wedding, her first husband charged Rachel with adultery. Jackson had to wait until 1794 (when the divorce was finalized) before he could legally marry Rachel. This event was dragged into the Election of 1828 and caused the pair much distress. His opponent, John Quincy Adams, used this to smear Jackson in the press. When Rachel died two months before Jackson took office, Jackson blamed her death on these personal attacks... and NEVER forgave J.Q.

Jackson loved to duel... and did it 13 times! A duel on May 30, 1806 against Charles Dickinson was over some unflattering remarks that Dickinson made about Jackson's wife, Rachel. In this duel, Jackson let Dickinson shoot first. Jackson was hit, but he still had the power to take aim and fire back. However, Jackson's gun misfired. Per the "rules" of dueling, Dickinson was forced to stand his ground until Jackson could reload and fire. Jackson killed Dickinson on the next shot. The bullet that wounded Jackson was lodged near his heart and could not be safely removed. As a result, he carried that bullet in his chest for another 39 years, until his death in 1845.

On January 30, 1835, the first Presidential assassination attempt took place. Jackson was leaving a funeral when Richard Lawrence, an unemployed housepainter from England, aimed a pistol at Jackson, which misfired. Much to the shock of Jackson, Lawrence pulled out a second pistol, which also misfired. (Odds of that: 125,000 to 1.) Lawrence was restrained, and Jackson attacked Lawrence with his cane. Others present, including Davy Crockett, actually had to pull the President off his would-be assassin! (Lawrence was later declared insane and died in a mental institution.)

Jackson's parents were Scots-Irish colonists who emigrated from Ireland in 1765. Two years later, Jackson's father died in an accident three weeks before he was born in the Waxhaw area. Jackson's exact birth site is unclear because he was born about the time his mother was making a difficult trip across the Appalachian Mountains after burying Jackson's father. The area was so remote that the border between North and South Carolina had not officially been surveyed. Wherever he was born, he was the first President to be born in a log cabin.

After Jackson's mother died when he was 14, he was raised by his uncles. Despite not being able to write until he was 17, Jackson studied law in Salisbury, North Carolina, in his late teens. In 1787, he was admitted to the bar and became a lawyer in Jonesborough, an area that is now part of Tennessee. As such, he is a true "self-made" man.

As the first President to truly embrace the power of the office, Jackson vetoed more bills than all previous Presidents combined. He used the veto 12 times in his two terms in office. (Of course, this is laughable when compared to the 635 vetoes later dolled out by President FDR.) His most famous use of this Executive power occurred when he vetoed the re-chartering of the Second Bank of the United States in 1832.

Jackson was the first President to invite the public to attend the White House ball honoring his first inauguration. The crowd became so large (over 21,000) that Jackson's guards could not keep them out of the White House. Some people stood on good chairs in muddied boots just to get a look at the President. Thousands of dollars of dishes and special China were broken. The crowd became so wild that punch and liquor was poured in tubs and put out on the White House lawn in order to lure people outside. At the party, Jackson served a 1,400 pound cheese that was sent to him. So much cheese fell on the carpets that the smell lasted for weeks. In the end, the party earned Jackson the nickname "King Mob".

Jackson never had any children of his own but did have three adopted sons, two of which were, ironically, Indian orphans. The Jacksons also acted as guardians for eight other children. Jackson once promised his niece, Sarah Childress, "Daughter, I will put you in the White House if it cost me my life." He did. She married future President James K. Polk.

On the last day of his Presidency, Jackson admitted that he had but two regrets from his time in office... that he had been unable to shoot Henry Clay or hang John C. Calhoun. (Clay was part of the "Corrupt Bargain" that kept Jackson from becoming President in 1824. Calhoun had been his first Vice President but resigned during the South Carolina Secession Crisis.)